"Fantasy on a Theme of Morawski" Trailer


The movie was selected for Camerimage 2011 and had it's premiere on the Festival.

It tells a story of a forgotten, yet congenial Polish composer Eugeniusz Morawski (1876-1948).

His works that we can perform today are just remnants. All the rest (about 80% of the heritage!) burnt in the fire of Warsaw Uprising 1944.

In 2011 Monika Wolińska, hearing the only 1970's recording of Morawski in a radio decided to re-record and publish his music for the very first time ever. She performed Morawski's 3 symhonic poems with Sinfonia Varsovia. These are amazing masterpieces of orchestral music and it's even more surprising, how such a thing could have disappeared from people's memory.

The remaining music of Morawski, very reach and emotional, indeed a "film-like", was composed mostly beween 1910 and 1920 in Paris, where Morawski lived for over 20 years. It consists of 3 symphonic poems and 2 ballets, some songs and the rest... piano conertos, symphonies, other symphonic poems, quartets etc. - is most probably irreversibly gone.

The album with the music and the film on DVD will be released in April 2012.
Thank you very much to all those involved.
The full crew and cast list in the post below. 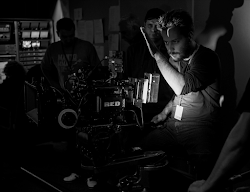